A Menagerie of Model Organisms

What can a worm or fish tell us about the human body? When it comes to biology, quite a lot actually. In many cases, scientific inquiry begins with our relatives in the animal kingdom.

For thousands of years, animals have helped humans advance biomedical research. From yeast and worms to fruit flies and mice, these creatures hold clues to the secrets of our own biology.

“Model organisms, in general, are useful because evolution doesn’t reinvent the wheel when it goes to a different species,” says Associate Professor Bruce Draper, Department of Molecular and Cellular Biology. “It keeps to using loosely the same genetic modules to build on things.”

All modern life arose from the same ancient ancestor. So to study human eye development, for example, a good place to start is the fruit fly because the gene networks that govern its eye development are similar to those found in mammals. Through experimentation, researchers can then explore potential relationships to human health.

For much of her career, Professor Sean Burgess, Department of Molecular and Cellular Biology, used yeast as a model organism to study the choreography of meiotic chromosomes, a process integral to cell division. But she ran into a problem.

“Yeast don’t really have sexes,” says Burgess. “It’s just a diploid cell that goes through meiosis, and I was interested in the differences between oogenesis (egg production) and spermatogenesis (sperm production).”

Burgess knew of her colleague Bruce Draper’s work on germline stem cells in zebrafish, the cells that eventually become eggs and sperm. She attended a seminar given by Draper to learn more about the potential power of zebrafish for her own research.

“Yeast has the tiniest nucleus and it’s really hard to see the chromosomes, but Bruce showed that you can see the chromosomes in zebrafish,” says Burgess. “I thought, ‘Wow, this is an amazing system for studying meiosis in different sexes.’”

“Sean Burgess is a great example of someone who has recently switched from yeast to a vertebrate—zebrafish—so that is a huge leap,” says Draper. “She’s a great model for how science should be done. The question should drive which model organism to use, not vis-versa.”

In the basement of the Life Sciences Building, around 1,500 fish tanks, ranging in size from briefcases to small crates, are systematically laid out in rows on metal shelves. From fertilized egg to adult, the roughly 20,000 fish represent the entire zebrafish lifecycle, providing Bruce Draper with a comprehensive view of their growth.

“If you’re looking at the process of development—so going from a fertilized egg to a swimming, feeding organism—all that process in mammals is happening in utero, so you actually have to sacrifice the mom to get the embryos out to study them,” says Draper. “With zebrafish, it’s all external fertilization.”

Part of Draper’s research focuses on problems of reproductive development. Zebrafish (Danio rerio) are well-suited for this research as their embryos are clear, providing a window into the biological machinery behind their formation. As the fish age, they develop stripes and lose their transparency.

Researchers bypass this problem by genetically modifying zebrafish with a gonad—the organ responsible for producing sperm and eggs—that glows under ultraviolet light. This allows continuous monitoring of gonad development as the fish grows, providing clues about reproductive development diseases like ovarian cancer.

Previously, Draper and his colleagues identified the gene fgf24 as important for gonad development in zebrafish. Mutant zebrafish developed defective gonads and had limited reproductive abilities. While this specific gene signaling isn’t known to be involved in mammalian gonad development, many aggressive ovarian cancers correlate with an overactive signaling pathway related to this gene. Overall, about 84 percent of the genes associated with human disease have counterparts in zebrafish.

Draper and his colleagues are investigating how single-cell RNA sequencing could help advance their research. The technique allows a high-resolution view of individual cells and the genes they express.

“We’re now identifying on a much more refined level what genes are expressed in particular cells,” he says, noting that the most aggressive forms of ovarian cancer typically occur in the organ’s cell linings. “We’re very interested in trying to identify those epithelial cells in our dataset so that we can start asking what other genes are expressed in there.”

Draper’s techniques for this project are being informed by Celina Juliano, whose office is just a few doors down from his.

Eternal life. For humans, it’s a fantasy pulled from science fiction, but for the Hydra (Hydra vulgaris), a small freshwater invertebrate, it’s a reality. These organisms, which look like miniature, fleshy palm trees with swaying fronds of tentacles, boast stem cells that exist in a continuous state of renewal and seem to hold within their genomic code the key to biological immortality. Every 20 days, the whole organism renews itself.

“As far as we can tell, it doesn’t age or die,” says Assistant Professor Celina Juliano, Department of Molecular and Cellular Biology. “You can cut little pieces out of the animal and it will regrow and maybe the most amazing thing is that you can dissociate the animal into single cells, mix them all up, put them back in a ball and a new Hydra will just grow out of it.”

remain a mystery. Juliano hopes to solve some of those lingering questions and further establish the Hydra as a model organism for regenerative research.

“If you or I were injured, say our hands were cut off, there’s a specific genetic program that is activated and is required to heal the wound, but the hand wouldn’t grow back,” says Juliano. “That same genetic program is activated after injury throughout the animal kingdom, but in some cases, instead of triggering scarring, it triggers regeneration and thus the missing body part is replaced.”

Juliano and her colleagues have meticulously conducted a single-cell sequencing project on Hydra, defining the exact genes expressed in each cell type. They’re developing tools to help them better control this gene expression.

As technologies advance, UC Davis scientists and researchers are gaining unprecedented windows into the machinations of life. With the help of model organisms, they’ll reveal the causes of disease and illuminate potential paths to treatment and prevention.

Our tiny relatives in the animal kingdom are making mammoth contributions to scientific research and helping us answer the biggest questions about life. 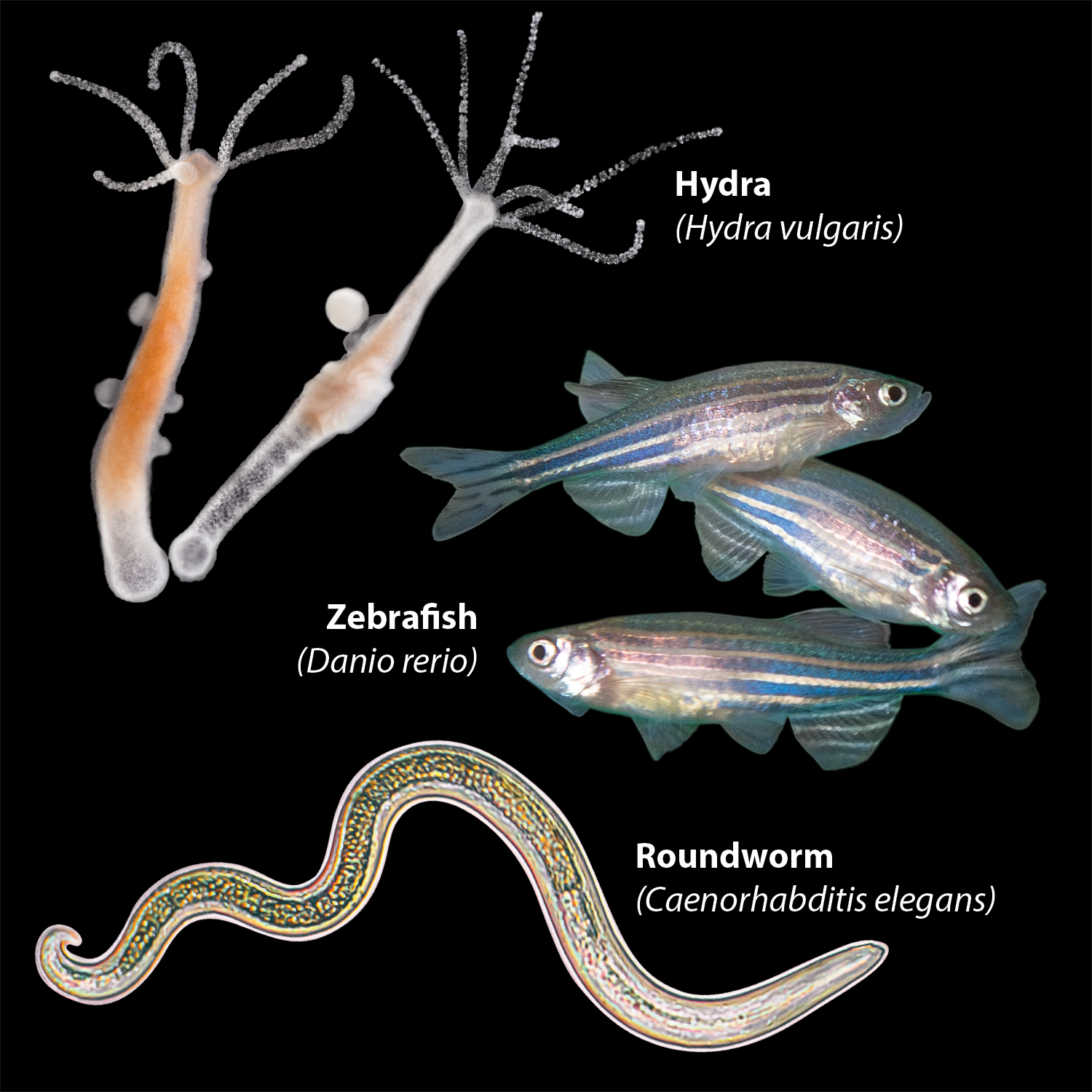 Flip through the pages of a scientific journal and you’ll find study upon study with graphs, tables, plots, structural models and more. There’s no doubt about it, science generates a lot of data. But sometimes that data doesn’t quite fit into a larger publication. Sometimes it stands on its own and despite not being tied to a larger study, it could be useful to the scientific community.

Biochemistry, molecular, cellular and developmental biology graduate student Jamie Ho produced such data during her first year of graduate school. She’d just finished her rotation in Professor Daniel Starr’s laboratory, where she studied nuclear migration in nematodes (Caenorhabditis elegans). Defects in cell migration can lead to problems with movement and in the formation of the roundworm’s vulva, preventing it from laying eggs.

Using CRISPR/Cas9 gene editing techniques, Ho and her colleagues successfully depleted the amount of the cellular transport protein dynein in the precursor cells of developing worms. The findings confirmed that dynein plays a major role in allowing the nuclei of precursor cells to move through small spaces in the worm’s body.

“It was a really small project but the results ended up being great,” says Ho.

While Ho’s data didn’t fit into a larger lab publication, Starr encouraged her to seek other opportunities to share her findings. That’s how she found microPublication Biology, a peer-reviewed micropublishing journal. Ho and her colleagues published their data with the outlet.

“I think a lot of labs hold onto these small pieces of data because they’re waiting for it to fit into a bigger picture,” Ho says. “Micropublications are a nice way to disseminate a lot of small snippets of high-quality data.” 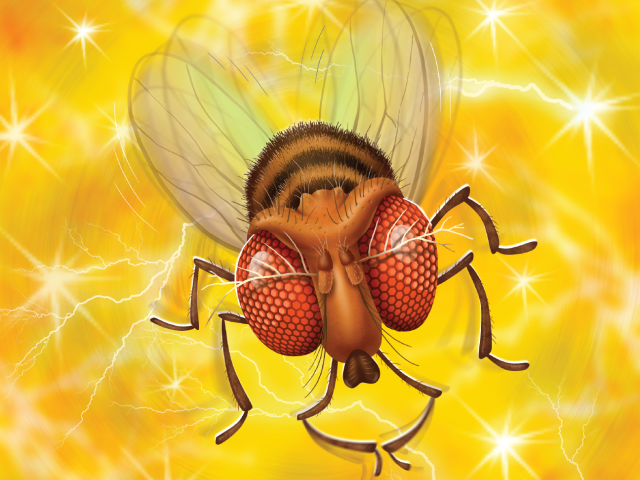