Underlying Kathryn Prendergast’s interest in neuroscience is an interest in the interconnectivity of all biological things. Despite the branching biological disciplines, each one so specific in its focus, it’s important to zoom out and view the big picture.

“People dig themselves into a hole sometimes, because they start getting so narrowly focused on whatever they’re studying that they tend to ignore everything else that’s influencing their system,” said Prendergast, a third-year Neuroscience Graduate Group student said. “Nothing happens in a vacuum.”

Including illness. From genetics to the environment, numerous factors affect our physical and mental well-being.

Working out of the lab of Kimberley McAllister, director of the UC Davis Center for Neuroscience, Prendergast studies how viral infection during pregnancy leads to an increased risk of offspring developing autism spectrum disorders or schizophrenia. She uses the maternal immune activation model, simulating sickness in pregnant mice and then tracking the neurodevelopment and behavior of their offspring.

“A lot of labs have been using this model and it’s really interesting because it reflects a lot of the variability that we see in the human population,” said Prendergast. “One of the things that we noticed in our lab is that there are factors that can determine whether or not these animals are susceptible or resilient to maternal infection.”

By determining the mother mouse’s baseline immunoreactivity before pregnancy, how the immune system responds to unfamiliar molecules, Prendergast and her colleagues can better predict how her immune system will respond to sickness while she’s pregnant and if that reaction puts her offspring at risk for changes in neural development.

"If that applies to human populations, we could predict which women are most likely, if they get sick during pregnancy, to have children that are predisposed to autism or schizophrenia and maybe intervene during those sicknesses,” said Prendergast.

How do you simulate sickness in the lab?

First you need to get yourself a supply of the immunostimulant polyinosinic:polycytidylic acid, otherwise known as poly(I:C). The immune system of a mouse dosed with poly(I:C) reacts as if it’s sick with a viral infection, producing immune molecules called cytokines. Prendergast and her colleagues use a specific cytokine called interleukin 6 (IL-6) to make predictions about the outcomes of maternal infection.

“When you’re sick, IL-6 spikes and enacts a cascade of immune responses. It’s also the cytokine that gives you a fever and makes you feel sick. That’s what we’re checking for in the blood, and it indicates the magnitude of the immune response,” said Prendergast. “During pregnancy, versus before when we test reactivity at baseline, we use a much higher dose partially because there’s immunosuppression during pregnancy and there’s a threshold of a sufficient amount of immune activation.”

Prendergast and her colleagues categorize the mouse models as either low, medium or high in their immune response to poly(I:C) before pregnancy. But evidence of an immune response doesn’t necessarily mean the pup will develop an autism spectrum disorder or schizophrenia.

To figure out which ones show developmental changes, Prendergast and her colleagues administer behavioral tests to the mice 60 days after they’re born. Only then can the researchers start linking immunoreactivity to behaviors present in neurodevelopment disorders. Prendergast and her colleagues recently published research related to this topic in the journal Brain, Behavior, and Immunity. Prendergast's research was funded by a Learning, Memory, and Plasticity (LaMP) grant. 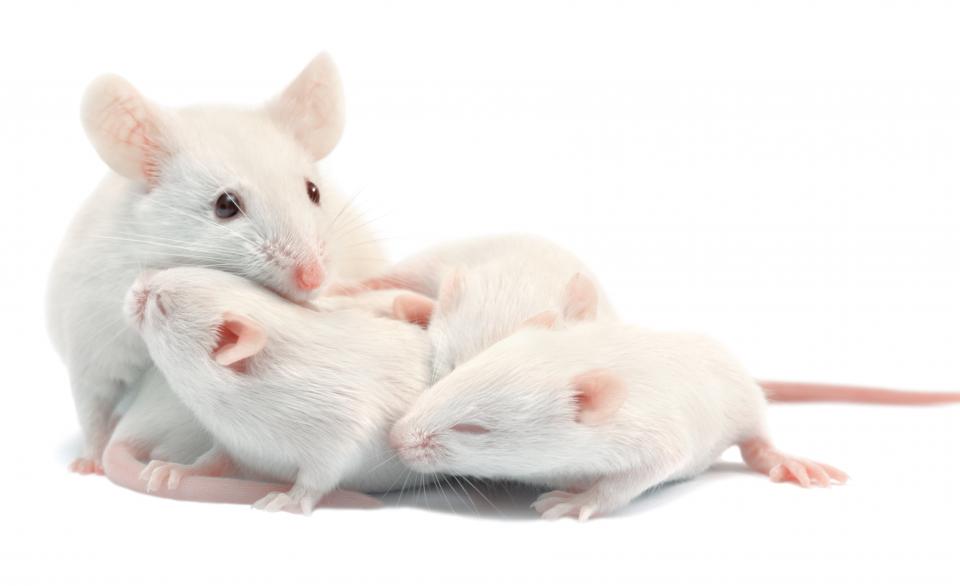 Studies with laboratory mice at the UC Davis Center for Neuroscience show how activation of the mother’s immune system during pregnancy can lead to neurological problems in offspring. Researchers have now found a way to detect which mice are susceptible to this effect.

How to test a mouse for anxiety

Repetitive behaviors, difficulty with executive functions, anxiety, these are some of the behavioral symptoms associated with autism spectrum disorders and schizophrenia.

But how can you tell if a mouse is anxious? Prendergast and her colleagues run a slew of experiments to figure out just that, among others for different behavioral characteristics. The experiments, Prendergast explained, are designed to take advantage of what the animals naturally do. For instance, a house mouse probably won’t scurry out into the middle of a room and sit still. Such prolonged exposure is unsafe, leaving it open to threats.

“One of the tests we do for anxiety is called open field and we literally just put [the mice] in a big open box and videotape them,” said Prendergast. “We track where they spend their time, so animals that are more anxious will probably huddle in a corner, barely move, really stick to the edges. Less anxious, more exploratory, animals will eventually venture out into the middle and start moving around.”

The experiment is one of many for the single behavioral trait of anxiety.

Prendergast’s suite of behavioral experiments are ongoing. Once the team starts linking specific immunoreactivity signatures to behavioral abnormalities similar to autism and schizophrenia, the model could potentially be applied to humans, perhaps paving a path for the development of interventions and therapeutics.

For Prendergast, the research is part of a larger endeavor to explore what she feels is one of humanity’s final frontiers: the human mind.

“What are the neural underpinnings of what makes us human?” said Prendergast. “And what makes things have consciousness?”

“I think we’re far away from understanding something that nebulous,” she added. “But why [study the] brain? Because it’s so beautiful and intricate.”

Exactly How Does an mRNA Vaccine Work?