Cichlid Extinction in Lake Victoria Due to Specialized Jaw

A UC Davis Evolution and Ecology team has discovered that cichlid fishes in Africa’s Lake Victoria have suffered a unique and unexpected effect of evolutionary adaptation: mass extinction.

While a graduate student in Interim Dean Peter Wainwright’s lab, PhD student Matthew McGee studied the die-off of cichlid species in Lake Victoria that occurred after Nile perch were introduced into the lake in the 1950s.

Since then the perch, Lates niloticus, have decimated the lake’s fish-eating cichlids, once the most species-rich group of cichlids in Lake Victoria. The native fish have essentially been removed and replaced by the invader. The going theory had been that the perch ate the cichlids.

In reality, they out-ate them.

Now a postdoctoral researcher at the University of Bern in Switzerland, McGee discovered that Nile perch were able to monopolize fish-eating cichlids’ food source, identifying the primary culprit as the cichlids’ specialized pharyngeal jaws. The findings were published in the November 27 edition of the journal Science. 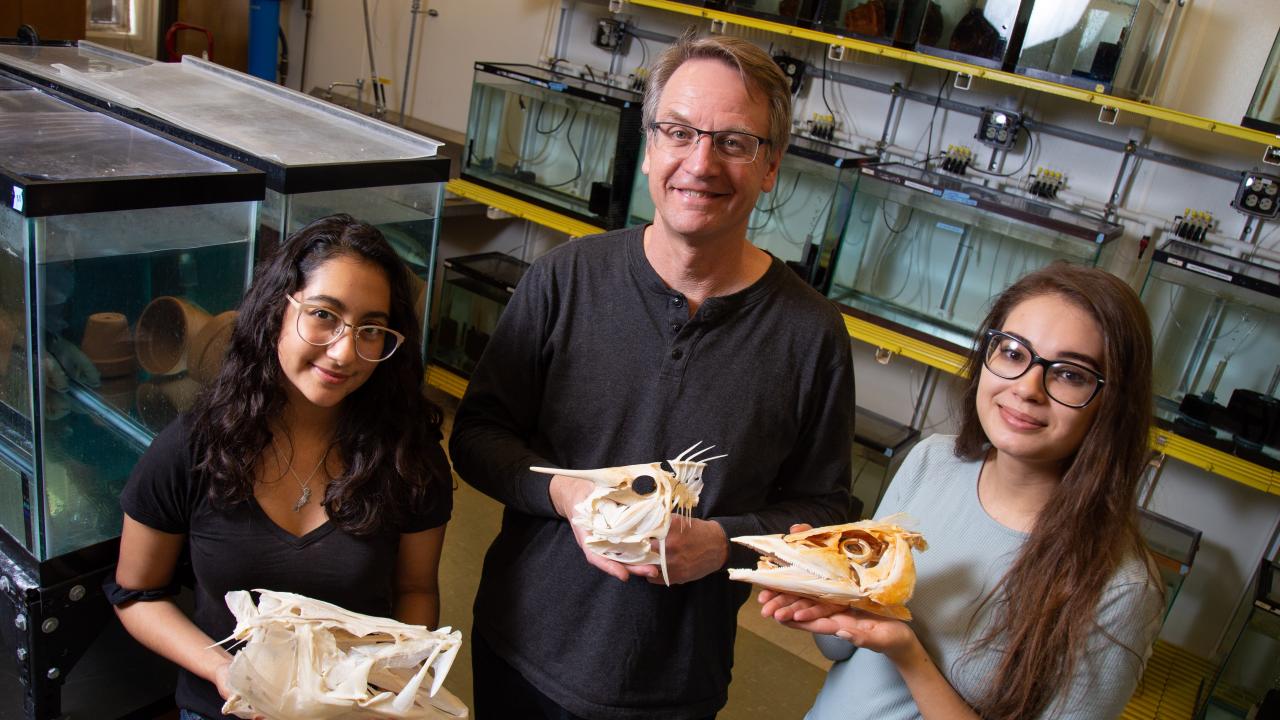 How Does a Fish Get Its Shape?

For the past three summers, Professor Peter Wainwright and students have journeyed to the National Museum of Natural History’s Museum Support Center to collect data from preserved specimens in the National Fish Collection. In total, they've generated a dataset on 6,000 species and 16,000 individual specimens.

A specialized trait in several fish groups, pharyngognathy involves multiple modifications of the jaw apparatus in the back of the throat that allow a fish to generate high bite force. This makes it good at feeding on tough and hard prey items.

The innovation is thought to have played an important role in cichlids’ spectacular diversification throughout marine and freshwater ecosystems. But pharyngeal jaws don’t open widely enough to efficiently swallow large prey items such as fish. Instead, fish-eating cichlids must awkwardly chop large prey into pieces.

“This is like trying to cut a steak with a meat tenderizer,” McGee said. “It'll work eventually, but there are better tools for the job.”

When fast-eating Nile perch invaded the cichlids’ habitat in Lake Victoria, the indigenous species were at a distinct disadvantage.

“We did not anticipate that predatory cichlids would take hours to swallow a fish when Nile perch took seconds,” McGee said. The cichlids were so slow, in fact, that McGee bought a portable desk for use in his lab, so he could do other work while watching his study subjects chew.

The findings illustrate an important side effect of evolution: Innovative adaptations come with liabilities as well as benefits.

“This work overturns the long-held belief that the primary cause of the extinctions was that the Nile perch ate the cichlids,” said Wainwright, who co-authored the study. “It shows that this major evolutionary innovation carries some crucial trade-offs, so that it is not always beneficial.”

For nearly 50 years, the robust pharyngeal jaws of cichlids, wrasses and other pharyngognathous fishes have been considered a classic example of evolutionary innovation that opened up new niches through increased trophic flexibility. Although this is almost certainly correct, McGee’s results suggest that the innovation involves a major trade-off that severely limits the size of prey that can be eaten.

This leads to competitive inferiority in predatory niches and extinction in the presence of a predatory invader lacking the innovation.

McGee added that such trade-offs merit further study, as researchers often assume that major innovations are mostly beneficial without carefully considering their downsides.

“Biologists study trade-offs and specializations all the time, but for some reason major evolutionary innovations often get a free pass,” he said. “Our study shows that competition from invasive species is a bigger deal than we previously thought, which shakes everything up.”

“Endangered fish get a lot less attention than tigers and rhinos, but I think our work shows that it is critically important to dedicate resources towards preserving these species as well, not just for conservation but for increasing our understanding of biodiversity and the processes that sustain it,” he said.

The research was done with funding by the National Science Foundation and Sloan Foundation, and with assistance from the Lake Victoria Species Survival Program, the Tanzania Fisheries Research Institute and the American Cichlid Association.

This story originally appeared on the UC Davis Egghead Blog.