After the Hawaiian Islands formed, ancient members of the Drosophilidae family of flies buzzed their way across the ocean to the fertile archipelago to make a new home. With an abundance of new resources and opportunities, evolution went wild.

Over millions of years, the Hawaiian Islands Drosophilidae family diversified to more than 1,000 species. Some have hammer-shaped heads used to headbutt one another in battle, while others boast bulbous bodies and patterned wings. The differences extend beyond bizarre looks to reproductive capacities and behaviors.

Many of the Hawaiian Drosophila species are specialists, laying their eggs on different surfaces across the landscape, from rotting tree bark and flowers to leaves and spider eggs.

In a study appearing in Current Biology, UC Davis postdoctoral researcher Didem Sarikaya and her colleagues analyzed egg-laying strategies of 65 different Hawaiian Drosophila species and found that egg-laying capacities diverged in response to their unique environments, which directly affected the number of cells involved in each species’ ovarian development.

“These species have about a 50-fold difference in their reproductive capacity,” said Sarikaya, who works in the lab of Professor David Begun, Department of Evolution and Ecology and the Center for Population Biology. “When it’s so different, it begs the question, ‘why is this so different and how does it get so different?’ And that’s what we’re really addressing.”

Sarikaya conducted the research while studying for a Ph.D. degree in the lab of Professor Cassandra Extavour, Department of Organismic and Evolutionary Biology at Harvard University.

Lady of the flies

“Volcanic islands often lead to what’s called an adaptive radiation–for example, if you have one species that arrives there, it can then evolve into many new species that utilize the unused resources of that island and that’s what happened in Hawaii,” said Sarikaya. “Plants, insects, most animals that got there really evolved fascinating features that you don’t usually see outside the islands.”

The Hawaiian islands, with its various ecosystems, provided an ideal system.

Sarikaya’s research follows in the tradition of the late researcher Michael Kambysellis, who hypothesized in the 1970s that ovarian development in Hawaiian Drosophila species was influenced by their environment.

“Despite that being a very commonly discussed theory, very few studies have actually been done to phylogenetically and statistically test whether that’s true,” said Sarikaya. “For that, you need a system where their reproductive traits and ecology are evolving rapidly.”

Starting in 2013, Sarikaya conducted fieldwork expeditions on three Hawaiian Islands, collecting fly specimens. She recalled that to attract some of the fly species, she’d soak a sponge in various rotten-smelling juices, let the flies land on the sponge and then collect them by sucking them up through a straw-like device.

“By the end of the day, you’re soaked in rotting mushroom juice and they’ll start walking on top of you because you smell so good to them,” she said, noting that she hadn’t done any fieldwork prior to that expedition. “It reeks.”

In some instances, Sarikaya spent her time in the lab coaxing her female flies to lay eggs by recreating favorable conditions.

“They don’t like to lay eggs unless they like what they’re smelling,” she said. “So that’s where I had to do some jury-rigging and see, ‘Oh, if I give them a rotting piece of what they like, they will lay eggs.’”

As a result of the experience, “I became an accidental outdoorsy person,” Sarikaya said.

An egg here, an egg there, eggs everywhere

In total, the team studied the egg-laying strategies and capacities of 65 different species, which lay eggs on eight different substrates, including bark, flowers, spider eggs, fruits, leaves, generalists, fungi and sap fluxes. Among all species studied, the number of ovarioles, the part of the ovary integral to reproductive capacity, ranged from two to 101 per female.

The biggest differences in egg-laying capacity were between bark breeders, which can lay clutches of 100 eggs, and flower and spider egg breeders, which lay only one or two eggs a day.

According to Sarikaya, the stark differences in egg-laying capacities could be explained by the role the substrate plays as a food resource for fly larvae. Flowers and spider eggs are limited food resources. The species specialized to those substrates evolved lower ovariole numbers compared to their bark-breeding relatives.

“What they do is they roam around the forest looking for a rotting tree,” said Sarikaya of bark breeders, noting that rotten trees are ample food resources. “Those species lay 100 eggs at a time.”

The other fly species, with their specialized substrates including leaves and fruits, among other substrates, fell in the middle when it came to number of eggs in a clutch.

Another thing to keep in mind, Sarikaya said, is how the availability of a specific substrate influences egg-laying capacity. Since happening upon a rotten tree could be a rare occurrence, bark breeding flies may make the most of the opportunity by laying as many eggs as possible.

“They’re evolving to specialize on different substrates and that’s really what’s driving the evolution of this trait,” said Sarikaya. 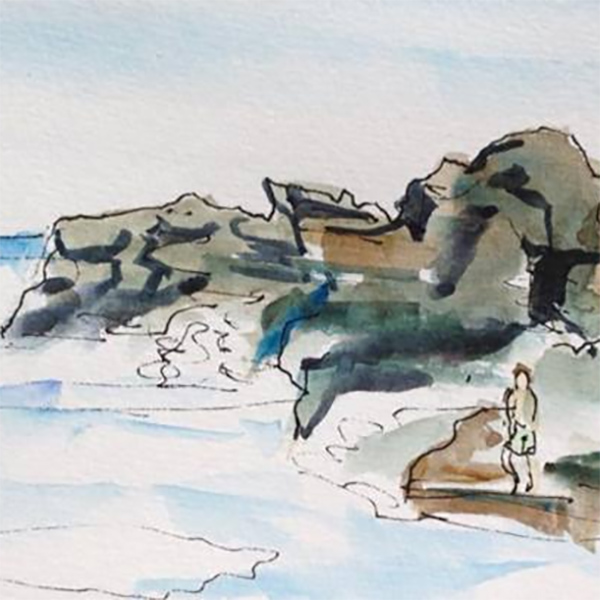 A tradition of winging it

When she stumbled upon Kambysellis’ research, Sarikaya realized that the methods necessary to explore his theory weren’t available until the mid-2000s. By 2013, such a study was feasible. Sarikaya collaborated with Kambysellis’ former colleagues Professor Kenneth Kaneshiro of the University of Hawaii Manoa and Steven Montgomery of the Bernice Pauahi Bishop Museum on the study.

“There’s something very exciting about following up on a question that a scientist had posed decades before and really be able to follow up on their ideas,” said Sarikaya. “It was really fun to be out there in the field with these seasoned entomologists and biologists who see the world differently.”

The study was supported by grants from the National Science Foundation, the National Institutes of Health and the Fonds de recherché Sante – Quebec.

Revealing the Genome of the Common Ancestor of All Mammals