Ask most people about the neurochemical origins of depression and you’ll likely hear how low serotonin levels are the cause. But today’s scientists know depression’s roots are more tangled and complex. One area of interest to them is the brain’s prefrontal cortex, a region responsible for motivational and goal-directed behavior. For those with depression, this region’s neurons are unhealthy, their connections, called synapses, withering like rotten roots.

Cameron and other researchers at UC Davis are actively exploring drugs capable of spurring such neural growth and restoring health. And some dark horse candidates are psychedelics like LSD, psilocybin and DMT.

“Psychedelics can increase growth of neurons in the prefrontal cortex and they cause growth rapidly,” said Cameron, who was first author on an ACS Chemical Neuroscience study that showed microdosing rats with DMT can positively affect their mood and anxiety and a co-author on a Cell Reports study that showed psychedelics promote neural plasticity. “Psychedelics are some of the most powerful drugs out there and it’s ridiculous how little we know about them.”

According to Cameron, popular antidepressants, like SSRIs and SSNRIs, are designed with the serotonin hypothesis of depression in mind and are missing the mark for some patients. Research shows the drugs are about 70 percent effective, tend to lose their potency and can be slow-acting, taking weeks to kick in.

“We need a fundamentally new way of tackling these diseases,” said Cameron. “That’s what I am hoping to do with my Ph.D.”

“Lindsay is the kind of student that every principal investigator hopes to work with,” said Assistant Professor David Olson, Department of Chemistry. “She has a voracious appetite for knowledge, is intensely curious and is driven to make discoveries that will benefit the world. Students like Lindsay are really the lifeblood of academic research.”

Opening the doors of scientific perception

At the basis of Cameron’s curiosity is a desire to develop tools that’ll fix the body when its systems go haywire. She traces her interest in physiology back to her parents, who both worked in the healthcare industry.

While pursuing a degree in pharmacology at McGill University, Cameron learned how various drugs travel through and affect the body. She was particularly drawn to brain-altering drugs, delving into the largely marginalized scientific literature available on psychedelics and their effects on brain chemistry.

Following graduation, Cameron entered the workforce to pay off her bachelor’s degree debt before pursuing graduate school. She worked as a research assistant, an optometric assistant and at a health food store. She wound up at UC Davis after accepting a junior specialist position in the lab of Professor Hwai-Jong Cheng, who holds appointments in the Department of Neurobiology, Physiology and Behavior, Center for Neuroscience and the School of Medicine.

“Dr. Cheng really helped me figure out how to approach scientific problems,” said Cameron. “By the time I got into grad school and I started, I had a leg up of where I would’ve been right out of undergrad, so I’m really glad I ended up taking those years off.”

By the time Cameron enrolled in the Neuroscience Graduate Group, psychedelic research had fallen off her radar. She then attended a presentation given by Olson. The Olson Lab specializes in chemical neuroscience, specifically focusing on psychoplastogens, an Olson Lab-coined term that refers to the small molecules like psychedelics that promote neural plasticity.

“I chased him out of the building and I was like, ‘Are you taking students?’” recalled Cameron. 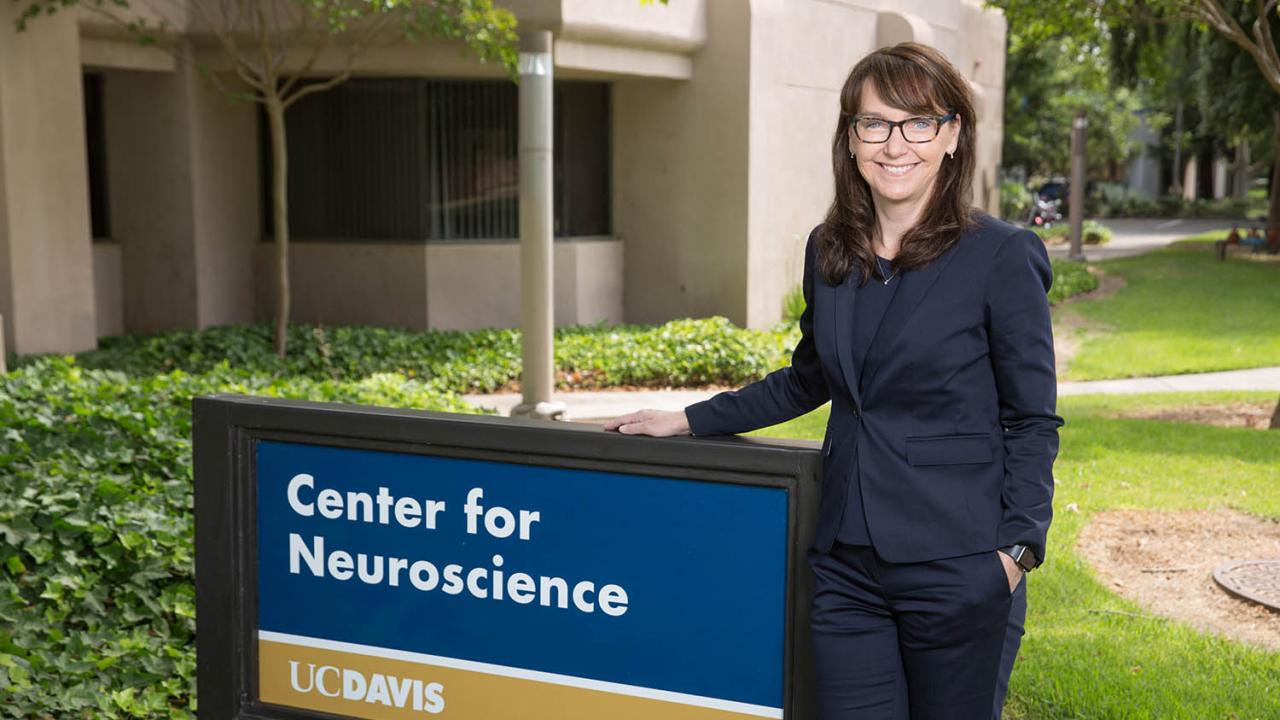 UC Davis Center for Neuroscience Director Kimberley McAllister studies the puzzle of the developing brain. Part of her research focuses on why viral infection during pregnancy can increase the likelihood of a child developing autism and schizophrenia.

There’s a trend hitting the coast. Peruse Los Angeles Magazine or The Atlantic and you’ll read about people singing the praises of microdosing.

“It’s people taking really small doses of psychedelics without any hallucination effects every couple of days. People are saying anecdotally that it helps them with depression and anxiety. It’s increasing their sociability and their creativity at work,” said Cameron. “They’re basically saying it’s enhancing cognitive function.”

Such anecdotes led to experiments. Cameron and her Olson Lab colleagues administered microdoses of DMT (N, N-dimethyltryptamine) to rats and measured the molecule’s effects on the rodents’ depression and anxiety behaviors.

To measure the antidepressant properties of psychedelics, the team performed a “swim test,” a staple rodent behavioral test for evaluating antidepressant drugs. During the test, researchers place a rodent in a small, water-filled tank after dosing the animal with either a psychedelic molecule or a placebo for a set period of time. Rodents with depression and anxiety-like symptoms typically just free-float in the water, but rodents dosed with DMT showcased motivational behavior, which in this case is swimming.

“This is one of the main tests generally used in the field and it’s been shown to correlate really well with if a drug will have antidepressant effects in humans or not,” said Cameron.

This is your brain on drugs

The team also tests the effects of psychedelics on the brain through neuronal cultures. Neurons from the prefrontal cortex are placed in a dish and then treated with a psychedelic molecule.

“What psychedelics and the novel therapeutics that we develop do is they specifically target neurons in the prefrontal cortex and they make them grow,” said Cameron. “Synapses are the connections between the cells and psychoplastogens increase the number of these connections.”

“The neurobiology of depression is directly linked to the neurobiology of plasticity,” added Olson. “As psychedelics are among our most powerful tools for promoting neural plasticity, we can use them to elucidate the biochemical signaling pathways that give rise to plasticity, and in the process, gain insight into potential strategies for treating depression and related disorders.”

For Cameron and Olson, psychedelics are too powerful to ignore, but their stigmatization in popular culture, not to mention their illegality at the federal level, has hindered research. To mine the potential benefits of these psychedelics, scientists like Cameron and Olson need to perform more research. But doing so requires navigating the rocky terrain of public opinion.

Fortunately, perceptions are changing. The limitations of available pharmaceuticals in treating mood disorders is ushering in a new wave of scientific inquiry into psychedelics.

“The data that’s out there is remarkable and I think that if you can get past the stigma that’s associated with psychedelics, research into their therapeutic effects may yield important discoveries,” said Cameron. “When using these compounds in research, there is a need to be professional and treat it like any other science. Psychedelic compounds are important tools that I am using to understand the basic neurobiology of depression.”