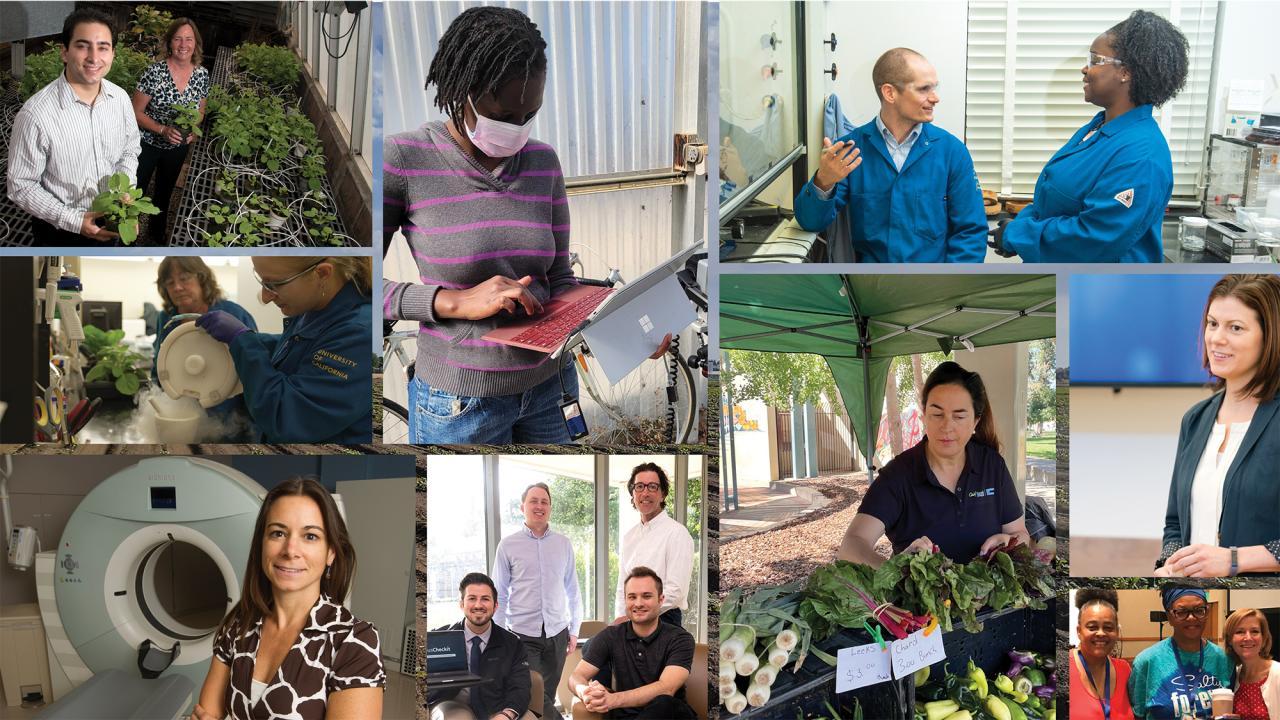 The University of California, Davis, reached a major milestone attracting $1.07 billion in external research funding in the fiscal year 2021-22, up $102.9 million from the previous record set last year. In doing so, UC Davis joins an exclusive group of fewer than 20 public universities in the nation surpassing $1 billion in research funding.

The awards lend support to a wide range of research areas including advancing public health and medicine, developing new technologies in food, agriculture and the environment, empowering the underserved and enabling a more resilient society.

“This new record for research award funding marks a historic moment for UC Davis,” said Chancellor Gary S. May. “More than ever, our university is on a mission to address some of the world’s greatest challenges, from how we feed the world to the health of all living beings. This milestone shows clearly how UC Davis research is being sought more than ever, by both the public and private sector, and across numerous fields. I’m confident this kind of global impact from UC Davis will only continue to grow.”

The federal government remained the largest provider of funding at $499 million, although down by $15 million from last year. The second leading source was the state of California at $210 million, up by $46 million from the previous year. Funding from industry made up the third highest source, totaling $104 million. Substantial increases also came from charities (up $26 million) and other UC programs (up $29 million).

“As the funding for research grows, so does the impact that UC Davis extends around the world,” said Prasant Mohapatra, vice chancellor for research at UC Davis. “This year’s grand accomplishment of surpassing $1 billion in research funding will translate into tomorrow’s discoveries, insight and products that offer a brighter future for our global community.”

An event to celebrate the achievement and showcase some of the exciting research discoveries and emerging technologies is planned for this fall. You can sign up to register for the event here.

The largest award, $53.4 million from the USDA Food and Nutrition Service, went to Kamaljeet Khaira, director of the University of California CalFresh Nutrition Education Program (UC CalFresh) to help reduce the chronic rate of obesity and encourage the awareness of healthy foods and increased physical activity among low-income individuals.

Notable awards by college and school

College of Agricultural and Environmental Sciences

The goal of the GEMINI: GxExM Innovation in Intelligence for climate adaptation project is to use 3D modeling, artificial intelligence and crop genetics to develop new technologies to improve and accelerate breeding pipelines for common bean, cowpea and sorghum, which are key crops for food and income for smallholder farmers in sub-Saharan Africa. The project is co-led by Christine Diepenbrock and Brian Bailey, assistant professors in the Department of Plant Sciences, and Mason Earles, assistant professor in the Department of Biological and Agricultural Engineering, and funded by the Bill & Melinda Gates Foundation.

This research project aims to integrate molecular and cellular physiology measurements on single neurons in order to identify how disease-causing genetic mutations alter neuron behaviors. Gerald Quon, an assistant professor in the Department of Molecular and Cellular Biology and the Genome Center, is leading the project that is funded by the National Institutes of Health (NIH).

The goal of the alternative COVID-19 antigen production project is to explore the viability of a range of biomanufacturing technologies to produce antigens using six different systems: two plants, and cultured mammalian, bacterial, yeast and filamentous fungal cells. The two-year project is led by Karen McDonald, a professor in the Department of Chemical Engineering, and funded by the National Institute of Standards and Technologies (NIST) through the Bioindustrial Manufacturing and Design Ecosystem (BioMADE),

College of Letters and Science

The psychedelics research project led by David Olson, an associate professor in the departments of Chemistry and Biochemistry and Molecular Medicine, plans to screen hundreds of compounds to discover new, nonhallucinogenic treatments for substance use disorders. Funded by the National Institute on Drug Abuse, part of the National Institutes of Health, the study will help us understand the basic mechanisms by which these compounds impact addiction and may help development of more effective and better tolerated treatments.

The two projects from UC Davis Continuing and Professional Education — Human Services are focused on supporting the delivery of training and workforce development services for public child welfare agencies and community-based organizations providing intensive services to vulnerable children, youth and families throughout California. Funded by the California Department of Social Services, the programs include instruction and development of new courses and training programs to meet evolving needs of the state’s child- and family-serving agencies. The projects are led by program directors Alison Book and Nancy Hafer.

The Blackstone Charitable Foundation project supports the creation of entrepreneurs and innovators under the name "Blackstone LaunchPad” with a focus on entrepreneurial skill-building so students can succeed in any career they choose. The UC Davis Blackstone LaunchPad makes progress towards specific milestones of increasing cumulative UC Davis student participation each year to support their skills in moving from ideas to growth to ultimately positive impact through a variety of on- and off-campus activities. The project is led by Andrew Hargadon, a professor and Soderquist Chair in Entrepreneurship in the Graduate School of Management (administered by the Mike and Renee Child Institute for Innovation and Entrepreneurship) and sponsored by Hanumantha Unnava, dean of the school.

The project titled “Examining how teacher-student interactions within mathematics and literacy instructional contexts relate to the developmental and academic outcomes of early elementary students with autism” proposes to bridge the gap between autism research and general education practices. The project is led by Nicole Sparapani, an associate professor in the School of Education and the MIND Institute, along with co-principal investigators Professor Peter Mundy and Nancy Tseng, lecturer in the UC Davis School of Education. Funded by the Institute of Education Sciences, the team will explore how general education teachers can use inclusive math and literacy instructional practices to support learners with autism in their kindergarten to third grade general education classrooms in large, diverse public school districts in Northern California.

Legal services to the underserved

The goal of this project from the School of Law is to provide legal services without charge to indigent persons, particularly client groups that have traditionally lacked significant legal representation including migrants, survivors of domestic violence and individuals whose civil rights have been violated. It is led by Gabriel Chin, professor of law and director of Clinical Legal Education, and funded by the State Bar of California.

This research project will examine hospital-to-home transitions for older adult couples who are managing heart failure. The ultimate goal is to develop interventions to support better symptom response and management during these transitions. The project is led by Julie T. Bidwell, an assistant professor in the Family Caregiving Institute at the Betty Irene Moore School of Nursing, and supported by the National Institutes of Health and National Institute of Nursing Research.

This project aims to improve breast cancer, heart health and Alzheimer’s disease care for women. The Krueger v. Wyeth Settlement Funds award will enable UC Davis Health researchers to study health disparities and advance projects focused on women of color and those in underserved communities. These women are traditionally underrepresented in research and have unique disease risks. As program director, Angela Haczku, a professor of medicine and associate dean of research at the School of Medicine, is assisting principal investigators Professor Luis Carvajal-Carmona, Professor Diana Miglioretti, Professor Amparo Villablanca and Professor Rachel Whitmer, School of Medicine leading the work in the four major projects of this collaborative research award.

Interdisciplinary research conducted by Organized Research Units, Special Research Programs, and IMPACT Centers within the Office of Research continued to attract significant funding at $113 million, up 19% from last year.** These joint efforts often focus on addressing complex, large-scale challenges that require expertise from many perspectives. Notable examples include:

The UC Davis Energy and Efficiency Institute, as a sub-awardee from Lawrence Berkeley Laboratory, will establish the California Flexible Load Research and Deployment Hub to conduct electricity sector applied research and development and technology demonstration and deployment projects. The goal of the project is to reduce dependence on fossil generation, firm up renewable resources to help California achieve its renewable generation and decarbonization goals.  The principal investigator at UC Davis is Professor John Kissock, Department of Mechanical and Aerospace Engineering. The project is funded by the California Energy Commission.

The goal of this project is to identify treatments and develop therapeutics to stop Alzheimer’s disease from causing irreversible damage to the brain. John H Morrison, professor in the Department of Neurology and director of the California National Primate Research Center, and his team are developing nonhuman primate models of Alzheimer’s disease that could explain the biochemical and cellular basis of neurodegeneration associated with the disease, and provide new therapeutic targets. This project was funded through the National Institute on Aging (NIA).

Research and development to support IMPROVE

This cooperative effort between the National Park Service and the Air Quality Research Center (AQRC) at UC Davis will analyze data and develop new methods and approaches to enhance the quality and scope of monitoring particulate matter and visibility in national parks, wilderness areas, wildlife refuges and other protected areas designated by Congress. The project is an enhancement to the Interagency Monitoring of Protected Visual Environments (IMPROVE) network, which is operated by the AQRC at UC Davis, and is led by Ann M. Dillner, associate director of analytical research, with funding from the U.S. National Park Service and support from the U.S. Environmental Protection Agency.

Note: Reports are based on the principal investigator’s home school or college. Where funds are awarded up-front to cover several years, the money is counted in the first year the award was received. Incrementally funded awards are counted as authorized in each year.