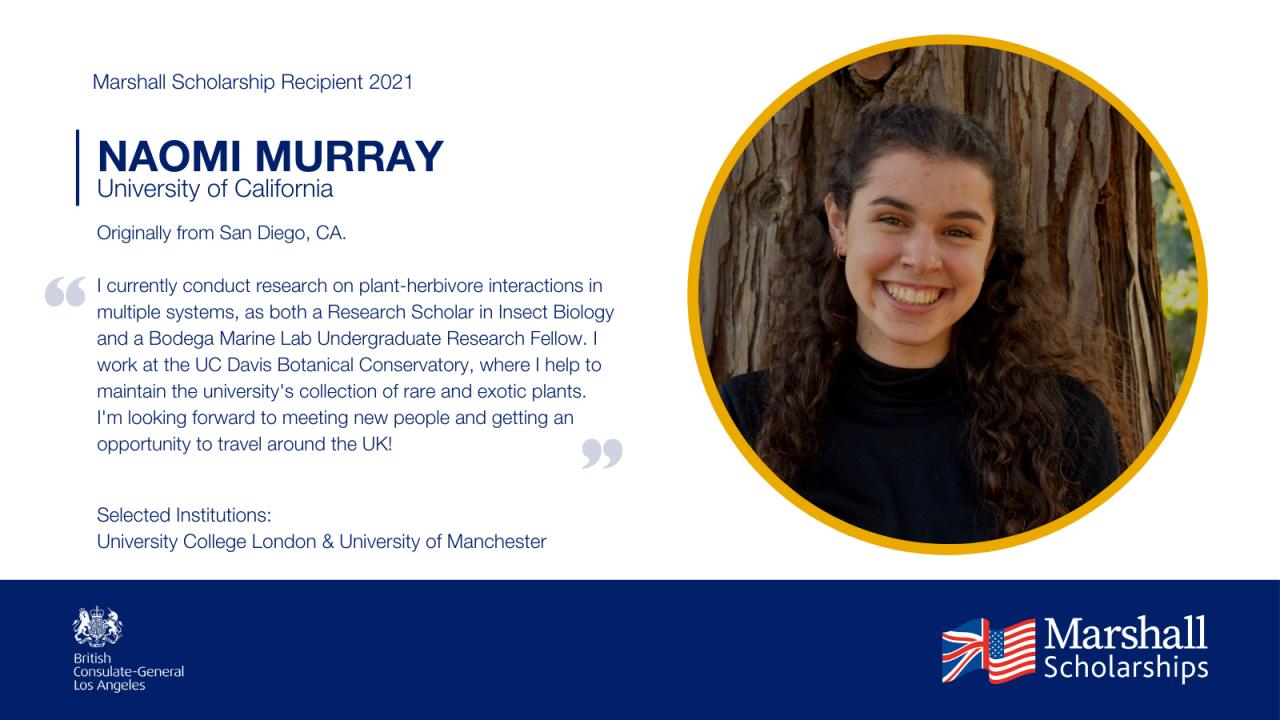 College of Biological Science student, Naomi Murray ’21, who is majoring in evolution, ecology and biodiversity, has just been awarded the prestigious Marshall Scholarship. She will pursue two Master of Science degrees, one in climate change at University College London, the other in science communication at the University of Manchester to help her communicate about climate change.

Another UC Davis student, Valencia Scott ’20, who double-majored in anthropology and international relations, also was named a Marshall Scholar. Scott will pursue a doctorate in criminology at the University of Oxford, where she will focus her studies on the criminalization of Black immigrants. She is planning a career in international human rights law.

The Marshall Scholarship Program dates back to 1954 as a post-World War II thank-you to the United States, and a means to retain and strengthen the United Kingdom’s close association with its wartime ally. The scholarship is named after U.S. Army Gen. George C. Marshall, namesake of the Marshall Plan, officially the European Recovery Program, which provided billions of dollars in aid to western Europe after the war.

The scholarships, highly competitive, merit-based awards for study in any discipline, typically cover two years of tuition, research and living expenses, with a total value of about $50,000 a year.

The program awarded 50 scholarships this year. Murray and Scott are the third and fourth UC Davis students to be so honored, after Lindsay Crawford in 2003 and Judith (Mansager) Richardson in 1966.

Murray and Scott are due to start their advanced studies in fall 2021.

Murray’s scientific interest is in the mechanisms through which forests may mitigate ecological disturbance and atmospheric change, and, in fact, her ultimate goal is to earn a Ph.D. in ecology in the United States. But, as a Marshall Scholar, her choice to pursue two distinct degrees reflects her belief that climate change must be addressed through communication as well as by engaging in climate science.

She comes from a background in which climate change was considered a politically motivated exaggeration — a belief she shared until she began her studies at UC Davis. Encountering the figures, statistics and articles that demonstrated the threat of climate change, she said, “I had to think critically and develop a new, informed perspective. Once I acknowledged the climate crisis, I saw evidence of it everywhere.”

Her undergraduate research projects gave her firsthand exposure to its effects. Monitoring tree mortality in the Yosemite Valley, she recorded unprecedented tree death, a result of intense drought, disease and pest infestation. While doing coastal research on seagrass, Murray observed uncharacteristically warm water, the push of southern species northward and the disappearance of key habitats. “I was stunned to note my proximity to change — it was not an abstract concept in class anymore, but a tangible reality.”

Murray is a Goldwater Scholar and enrolled in the University Honors Program. Her research has been supported by a Provost’s Undergraduate Fellowship and Kendra M. Chan Award (Bodega Marine Laboratory), as well as a Nieland Family Award.

Dedicated to advancing diversity in STEM, or science, technology, engineering and mathematics, she is an officer in UC Davis Strategies for Ecology, Education, Diversity and Sustainability, or SEEDS, and serves on the Goldwater Scholar Community Council’s Diversity and Inclusion Committee.