Hydra and the Quest to Understand Immortality

The Hydra, a small freshwater invertebrate, is an advantageous model organism for regenerative biologists. Named after the serpent from Greek mythology that grew two new heads for each one cut off, this tiny, jellyfish-like creature holds within its genomic code the key to biological immortality.

Hydra are unique because their stem cells exist in a continuous state of renewal. Kept safe and in isolation, these organisms show no signs of aging. Outside the lab, the only real threats they face are predators, weather extremes and disease.

Ever resilient, Hydra can survive dismemberment by regenerating lost sections of their bodies. Chop a Hydra into segments, and each segment will become a new Hydra. Blend one up, and you’re left with a soup of cells. If you ball up those cells using a centrifuge, they reorganize, eventually forming a new Hydra.

Assistant Professor Celina Juliano, Department of Molecular and Cellular Biology at the UC Davis College of Biological Sciences, and her colleagues are probing Hydra stem cells, hoping to find clues to the organism’s regenerative capabilities and longevity.

Stem cells form the foundational building blocks of an organism’s body. During embryonic growth and development, stem cells differentiate, becoming various cells throughout the body. In many organisms, stem cells lose their ability to replace dysfunctional cells with age.

“If the animal has very powerful stem cells—because stem cells are the cells that give rise to all of your tissues—then you can regenerate very well,” said Juliano. “They sometimes call Hydra the eternal embryo.”

Continuous stem cell renewal is a major focus of Juliano’s research. However, this doesn’t fully explain Hydra longevity. To uncover this mystery, Juliano is interested in how Hydra maintains its genome despite undergoing a large number of cell divisions.

“The Hydra renews itself all the time, but just renewing yourself isn’t enough,” said Juliano. “The genome itself has to be faithfully propagated.” 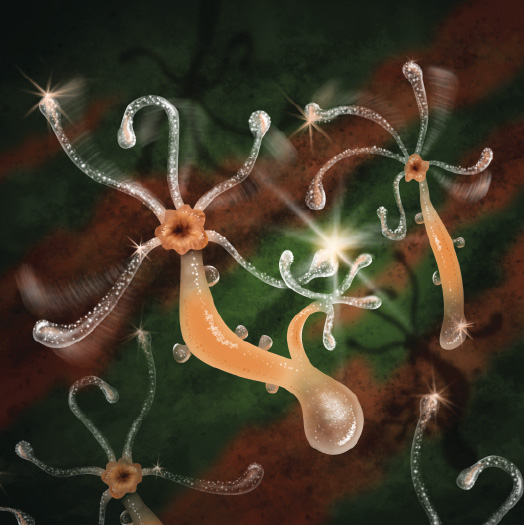 A Menagerie of Model Organisms

What can a worm or fish tell us about the human body? When it comes to biology, quite a lot actually. In many cases, scientific inquiry begins with our relatives in the animal kingdom.

Juliano and her colleagues in the Juliano Lab are searching for the genetic elements that help prevent biological aging in Hydra. They’re particularly interested in transposons, which are also called “jumping genes.”

In organisms that age, such as humans, transposon expression is kept in check by a variety of genetic pathways during youth. As time plods on, aging cells lose control over transposon repression. Uncontrolled, these jumping genes bounce around the genome, replicating, proliferating and inserting themselves into the genome like unhinged saboteurs.

Some believe transposon expression plays a role in aging, but why the human body’s cells eventually lose control over this pathway is still a mystery.

“I wouldn’t say it’s the magic bullet of why Hydra doesn’t age,” said Juliano. “But this is one thing we’re interested in, how transposons are repressed in adult stem cells.”

A place for the North American Hydra community

Though the Hydra is a miraculous animal, it is a much more popular model organism in Europe than the United States.

“Funding is tight in the United States and grants are more likely to go to more established model organisms, thus making it difficult to work on Hydra,” said Juliano.

To vitalize and grow the North American Hydra community, Juliano and some colleagues organized Hydroidfest 2016, held at the UC Davis Bodega Marine Laboratory. Roughly 60 researchers from seven countries attended the meeting, which was funded by a grant from the National Science Foundation.

“It was small, but you had this feeling that it was the start of something special,” said Juliano. “We had people come to the meeting who weren’t Hydra biologists, and they were interested in starting projects in their labs.”

Along with Christine Schnitzler, an assistant professor of biology at the University of Florida, Juliano is organizing an expanded meeting, dubbed Cnidofest 2018: The Cnidarian Model Systems Meeting, from the phylum Cnidaria (which includes Hydra, corals, sea anemones and jellyfish). It will take place at the University of Florida’s Whitney Laboratory for Marine Biosciences in September 2018.