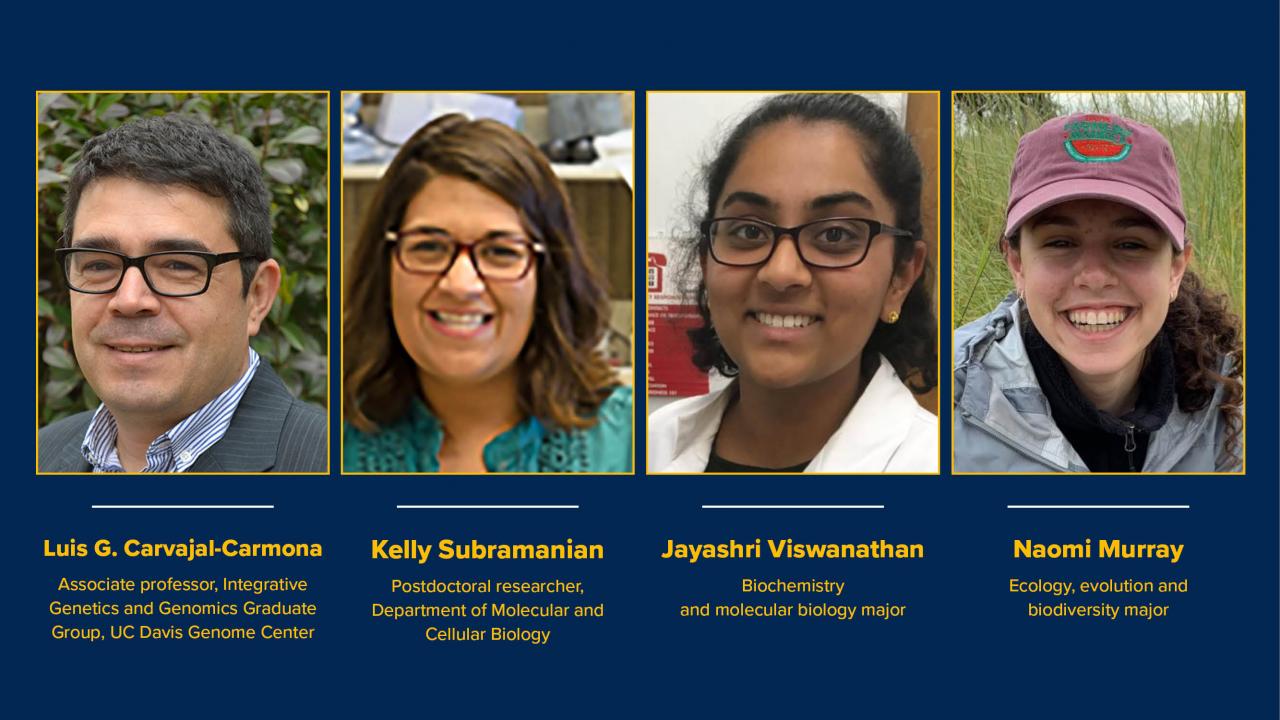 Four members of the UC Davis College of Biological Sciences are recipients of 2021 Chancellor’s Awards for Excellence in Undergraduate Research. Two undergraduate students, a faculty member and a postdoctoral researcher were among those honored by UC Davis Chancellor Gary S. May at the virtual awards ceremony.

Caravajal-Carmona “has tirelessly dedicated his research and time to understanding cancer health disparities in minority and underserved populations,” noted Chancellor May during the awards ceremony.

“His leadership was instrumental in implementing the Latinos United for Cancer Health Advancement (LUCHA) initiative at the UC Davis Comprehensive Cancer Center,” continued Chancellor May. “LUCHA’s goal is to understand and eliminate cancer health disparities in Latino populations through community-based outreach.”

In a nomination letter, J. Elizabeth Quino, an assistant research specialist in Caravajal-Carmona’s lab, remarked that Carvajal-Carmona “has made a positive impact not only in the field of cancer research, but in the lives of his mentees, and training the next generation of scientists.”

Postdoctoral researcher Kelly Subramanian, of the Department of Molecular and Cellular Biology, was also honored for her dedication to mentoring undergraduate students.

Despite the difficulties posed by the coronavirus pandemic, Subramanian’s dedication to undergraduate students never wavered.

“Under her guidance, her students have developed confidence, critical thinking, experimental habits and conceptual understanding of biological research,” wrote the authors of Subramanian’s nomination letter. “Ultimately, Kelly has cultivated our identity as scientists and has guided us to where we stand now.”

Chancellor May said that Viswanathan, a student majoring in biochemistry and molecular biology, has been described as a person who “possesses the kind of unquenchable scientific curiosity that distinguishes the world’s greatest scientists and engineers from their peers.”

Viswanathan works in the lab of Associate Professor of Chemistry David Olson, where she studies how psychedelics can help treat those diagnosed with mental health disorders like depression.

“Simply put, Jayashri is the single best undergraduate scientist I have ever encountered at UC Davis,” noted Olson. “She is perhaps the most motivated undergraduate researcher I have encountered in my entire career.”

Murray, a student majoring in ecology, evolution and biodiversity, was honored for her “strong intellectual curiosity and promise as a researcher.”

During her time at UC Davis, Murray has conducted research in many labs across campus. She’s studied the communicative behavior of plants, the effects of human-generated noise on tree swallow nestlings and plant-herbivore interactions in eelgrass beds.

Among Murray’s many achievements, Chancellor May noted that Murray was the recipient of the Kendra Chan Award, a competitive fellowship to perform research at the Bodega Marine Laboratory.

Murray “was the youngest person to win this fellowship, taking it at the end of her sophomore year,” said Chancellor May. “All other winners to date have been rising seniors.”

Postdoctoral researcher Nicole B. Coggins, of the UC Davis Genome Center, was among the three honorable mentions in the Chancellor’s Awards for Excellence in Mentoring Undergraduate Research category.