Motile Moves: College of Biological Sciences Dean Mark Winey Honored as a Fellow of the American Society for Cell Biology

Friday is usually the day Mark Winey leaves behind the Dean’s Office for his laboratory in Briggs Hall. It’s a brief reprieve from his duties as the college’s top academic officer and a chance to get back to the science.

“There’s a tradition here of deans keeping research programs” said Winey, the college’s dean and a distinguished professor in the Department of Molecular and Cellular Biology. “It keeps them connected to their research community and the scholarship in their home college.”

For more than three years, Winey has provided vision for the College of Biological Sciences, supporting the research ambitions of faculty, students and staff while advancing the college’s curriculum to provide an educational experience fit for the “century of biology.” All the while, he’s maintained an active lab.

For his contributions to cell biology knowledge and the scientific community, Winey was named a fellow of the American Society for Cell Biology. The ASCB cohort of fellows was formally recognized at the joint meeting with the European Molecular Biology Organization.

Staring down the centrosome barrel

Winey and his research team study centrosomes, the organelles in animal cells integral to cell division (both mitosis and meiosis) and responsible for maintaining cellular structure. Each centrosome contains two barrel-shaped clusters of microtubules called centrioles, each around 200 nanometers long and organized orthogonally. During cell division, these two barrels are pulled apart, forming the centrosome basis of a new cell.

The process, though precise, can go awry, leading to chromosomal anomalies.

“Those types of events in mitotic cells can give rise to tumors by contributing to genetic instability,” said Winey. “In meiotic cell types, this can lead to birth defects or spontaneous miscarriages, so there’s very important functions for these structures in cells and very severe consequences when they don’t work properly.”

To decipher the structural functionality of centrosomes, Winey and his lab team initially used yeast (Saccharomyces cerevisiae) as a research organism.

“We’ve worked on yeast spindle pole bodies since I was a new assistant professor, so it’s been a very long time,” said Winey, reflecting on the research. “It’s what I trained on before becoming a faculty member.”

“It’s the only centrosome-like structure studied where we know all the parts,” said Winey. “It’s made of 18 different proteins and we understand its regulation during the cell cycle.”

To get closer to the human cell and a clearer view of the spindle pole body, Winey introduced another organism to his research repertoire: a motile, single-celled eukaryote called tetrahymena.

The pond: a reflection pool for biology

“Most of the lab right now actually works on tetrahymena,” said Winey, who started studying the organism over 15 years ago.

Tetrahymena is covered in hundreds of hair-like structures called cilia, which are made of the same microtubule protein material that makes up centrioles. Historically, researchers knew the surface of microtubules acted as the cell’s roadways for protein transport, but the inside of these hollow rod-like roads was more mysterious.

“It turns out there are proteins on the inside of these hollow tubes too,” said Winey. “We discovered some of those in tetrahymena.”

“This was an accident,” he added. “We didn’t mean to discover them, but this is the way science goes and it led to the discovery of many candidate proteins.”

These proteins are referred to as microtubule inner proteins, or MIPs. Winey and his team are now performing structural biology research on these proteins by knocking out genes in tetrahymena and seeing how it affects the development of their cilia. 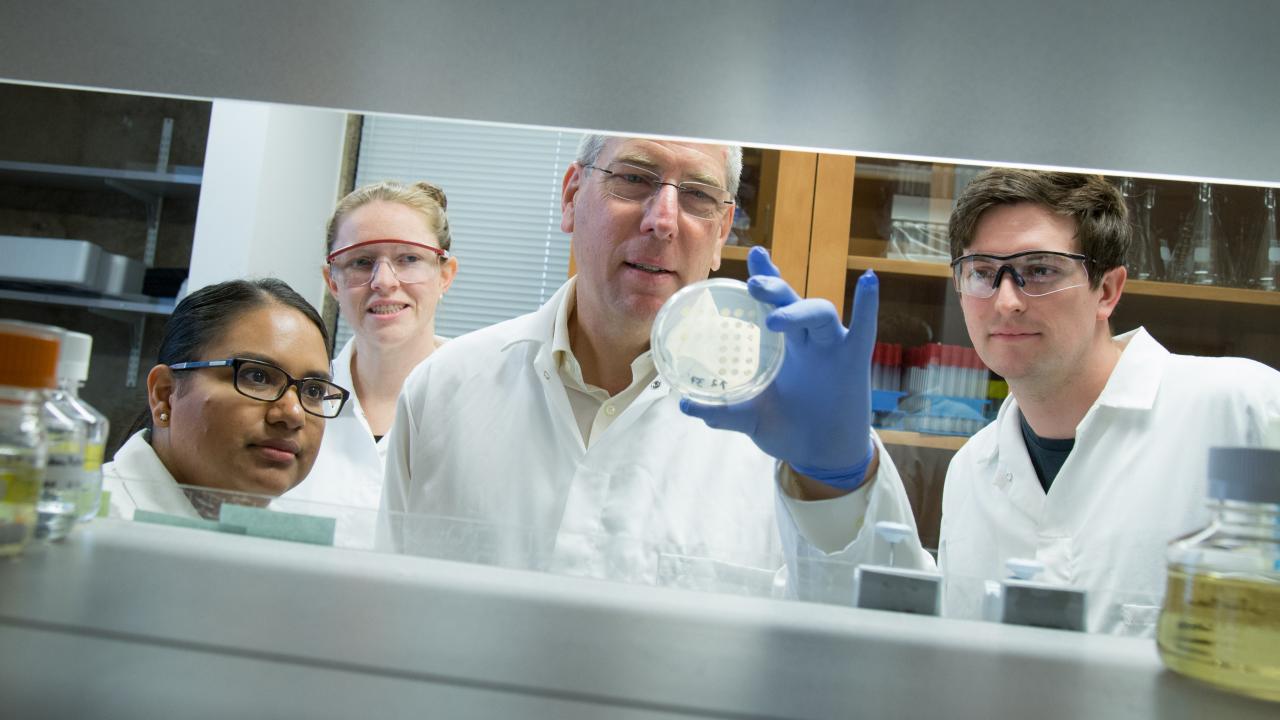 Mark Winey, dean of the College of Biological Sciences at UC Davis, became fascinated by science at an early age. But the draw to biology—specifically, genetics—was prompted by Winey's family.

Winey knows firsthand the necessity of investing in fundamental life sciences research and how that research changes lives. When Winey was a child, he watched as doctors scrambled to diagnose his sick infant sister. It was knowledge gleaned through foundational research that allowed doctors to eventually diagnose her with galactosemia, a rare metabolic disease. As the college’s top academic officer, Winey advocates daily for the college’s faculty, their research and, the scientists of the future, the students.

“We produce all that knowledge, which is important, but we also produce a scientifically literate workforce,” said Winey. “We are needed to produce the people who are going to take that knowledge and turn it into valuable tools or products.”